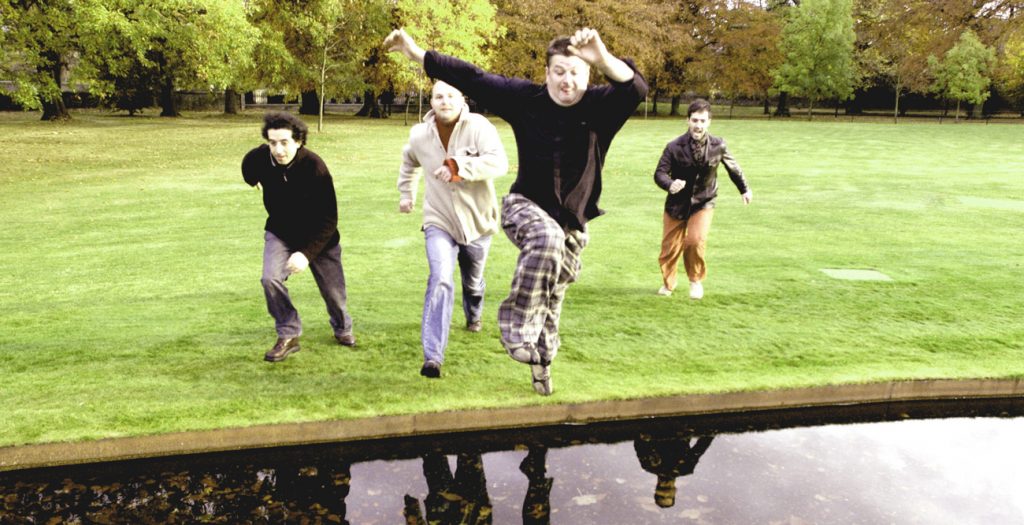 As good as anything coming out of New York...

This international Quartet started life with Mike Walker on guitar, Reid Anderson on Bass and Thomas Strønen on drums. It was a beautiful band, and we recorded the album ‘Headlong’ in 2004 for Caber Music.

After the first few gigs and recording, the equally impressive Steve Watts took over on bass.

We toured the UK and Scotland, and played at the Edinburgh and Bergen Jazz Festivals and played in Dublin and London and broadcast on Jazz On 3.

The first notes – a lovely pin-prick of Mike Walker’s guitar against the soft cushion of Reid Andersen’s bass – hang still and stately in the air. The instruments breathe in the oxygen they let swirl around them and then Phil Bancroft’s unassumingly potent tenor floats in to the frame, its arc shadowed by Thomas Strønen’s wry tabla-flavoured percussion. What follows is an object lesson in economic intensity; sax and guitar deliver delicate and incisive melody and countermelody, creating an illusion of more parts and more instruments than there actually are in the frontline while the rhythm section steers the narrative through waters that rise and fall in choppy yet always tightly harnessed energy. Think of liquid being shaken in a bottle, swishing grains in a rainstick. The contents of the vessel are about to escape, you swear. But they don’t. This mature exertion of control is really the key to this fine album. It’s one in which the head themes ring out unfettered and airily in the absence of chains of set chord sequences, where the silences fit tellingly into arrangements that are melancholic rather than maudlin, introspective without being forbiddingly introverted. Jazz has an international lineage of elegiac storytellers (Shorter-Ornette-Jarrett-Garbarek-Frisell-Endresen) and Bancroft makes a suitable addition to these voices, balancing restraint and propulsion with consummate ease. If you’ve heard any of the fine FSNT music that acknowledges the importance of Ornette and Motian as essential purveyors of both puckish invention and startling emotional atmospheres (I’m thinking Bill McHenry, Chris Lightcap or indeed Reid Andersen) then you’ll really dig this album. With its brooding grace and rigorous distillation, it marks Phil Bancroft out as a player and composer to be ignored at your peril.

This recording has been eagerly anticipated since the saxophonist first assembled this quartet two years ago, and does not disappoint. the four musicians are all individually very strong and distinctive players, but the real strength of the band lies in their absorbing manipulations of sound, texture and space, and the way in which they combine to generate a very high level of creative interplay within the saxophonists compositions. Bancroft’s own contributions are consistently striking, whether in the uptempo melee of ‘Goes Around, Comes Around’ or the slow spacious explorations of the two-part ‘Samson Sam Song’ or the not at all aptly named ‘Headlong’. Mike Walker’s original and unpredictable guitar work is a major cornerstone of the band’s sound, while Anderson (replaced in recent times by Steve Watts due to his burgeoning commitments with The Bad Plus) tends to anchor the pulse under Strønen’s restless percussion. Another excellent Caber release.

It’s been a year of very fine releases from Scottish jazz label Caber, yet they just might have outdone themselves with this set from Trio AAB saxophonist Phil Bancroft. This is Phil’s second set as leader and though it’s a world away from the spiky folk/jazz collisions of his usual outfit, it might be the album that puts him in the first division of European tenor players…
Headlong is by turns impressionistic, restless, even furious, though its energy is never less than focussed throughout.  Bancroft’s compositions have the same floating, disembodied quality as Paul Motian’s, and the band plays with the kind of airy, supple swing that you might find on Motian’s output with Joe Lovano. Hints of  ECM impressionism, Ornette- inspired scramble and free improv jostle with each other throughout. The result? A kaleidoscopic, freewheeling beauty of an album.
Though it’s Bancroft’s show, the other members of the quartet are given ample space and they don’t waste it. Guitarist Mike Walker is a sweetly melodic presence much of the time, though his occasional use of distortion brings out a distinctly feral, rockist edge to his playing (check the bruising intensities of “Groove 421”).
The saxophonist’s lush tone and sense of space imbues the ballads (particularly the beautiful title track) with intelligence and grace, while at higher energy settings he unleashes short bursts of vocalised aggression that threaten to push the whole thing off the rails. Drummer Thomas Stronen (of Food) is a revelation; like a hybrid of Max Roach, Paul Motian and Tony Oxley, he often gives the impression that he’s playing straight ahead swing while someone’s emptying a large bag of marbles over his kit. On a less abstract tip, bassist Reid Anderson (of Bad Plus fame) is solid, funky and lyrical throughout.
Given their apparent empathy, it’d be nice to think this is the kind of band that could stay together, though given the geographical problems involved I suppose that’s unlikely. One of my favourites of the year so far, and unreservedly recommended.

Of all the local scenes that are undoubtedly bubbling away beneath the surface, too low to figure significantly on the radar of national recognition, the one in Scotland appears at the moment to be the most vibrant. It probably goes back to the time when the (then) young Tommy Smith first grabbed the attention of fans, critics and major US jazz labels, and is now clearly in excellent health. Of course this is largely due to the network of fine, innovative musicians, but the cover of this and other Caber CDs may give another clue. The album is co-badged by the Scottish Arts Council and the PRS Foundation for New Music, which commissioned the majority of the music. There’s surely a lesson here for musicians in other regions. Or maybe they’ve already tried that route and funding bodies south of the border are just more miserly or conservative/philistine.
In fact this band are not Scottish at all – only Phil Bancroft himself qualifies. Phil is less well known than his brother and collaborator in the acclaimed Trio AAB, band-leader/drummer Tom, who at the time of writing is amazing audiences around the country with his Orchestro Interrupto in partnership with American pianist Geri Allen. On the evidence here, however, Phil’s lack of recognition certainly isn’t due to any musical lack, and can only be explained by his self-effacing, understated style. Joe Lovano’s name tends to crop up as a reference point, and indeed Phil studied with him for a while. A more home-grown comparison would be Martin Speake, and in fact a lot of this music reminded me of the latter’s ‘Secrets’ album, though less conventional and freer in approach.
Although Phil wrote all the music, this is quite definitely a band, with everyone making a full contribution. This is evident from track one, ‘Golden Section’, which starts off with a precise, intricate rhythmic patter from Norwegian drummer Strønen before Mike Walker’s weaving, McLaughlin-like guitar line enters, giving something of the feel of the Miles Davis band circa ‘In a Silent Way’. After a solo from Bancroft, there’s a neat bit of guitar-sax interplay before Walker emerges into the foreground. The whole thing has an organic, spontaneous feel. The following “tune” takes us further into post-Ornette collective improvisation territory. More guitar-tenor duetting is gradually joined by tumbling drums and the muscular, flexible bass of Reid Anderson (highly regarded for his work with US “grunge jazz” band The Bad Plus). In less accomplished hands, this kind of thing can get a bit tedious, but here interest is maintained throughout by spontaneous variations in instrumental permutations and levels of intensity.
Taking the album as a whole, there’s a pretty varied menu. ‘Double Trouble’ is more collective improvisation, with a squealing Bancroft at his most Ornette-like. Elsewhere there’s the sprightly ‘BOIP Avoiding’, a kind of skewed Latin groove on ‘Red Cow Flying’ (don’t ask me to explain the titles) and ‘Groove 421’ with its loose-limbed funk and blistering guitar solo. Generally, though, the atmosphere is restrained and contemplative, as on the title track (which is anything but headlong) and the two parts of ‘Samson Song’.
Whatever the style, the playing from all four is impeccable throughout: it’s a minor gem of small group improvisation and an album well worth investigating.

Where other contemporary tenor saxophonists overwhelm the listener with their fluency and confidence, Phil Bancroft’s playing has a watchful stillness that gently draws you in. His tone is light but firm and he uses shading and dynamics with great subtlety. He is a long-standing member of the fruitful Edinburgh jazz scene, but this quartet is an international affair, with Norwegian drummer Thomas Stronen, English guitarist Mike Walker and US bassist Reid Anderson, best known as a member of the Bad Plus.
Together, they create nine pieces in which shading, atmosphere and group interaction are the most important qualities. The four are so well integrated that it is impossible to tell where composition ends and improvisation begins, although each piece emerges as a complete and succinct statement.
Dave Gelly The Observer

It’s typical of saxophonist Phil Bancroft that he should announce his
arrrival on CD as an international bandleader, not with an extravagant
fanfare, but with a recording of quiet assurance. Bancroft plays tenor in
his own image: a big man with a warm personality, not given to excessive look-at-me pronouncements. He’s found three kindred spirits in the edgy, inquiring English guitarist Mike Walker, the undemonstrative but sure-footed New-York-based bassist Reid Anderson and Norwegian Thomas Strønen, one of Europe’s most inventive drummers.
There’s wit and an emphatic pulse here, space to think as well as beguiling warmth and, even when the music approaches jazz’s extremities, it has a composed quality. If this was on ECM Records, a major voice in British jazz would be being hailed.

If you’ve heard Scottish saxophonist Phil Bancroft with his drummer brother
Tom and guitarist Kevin MacKenzie in Trio AAB, you might expect more of an
upfront mix of John Coltrane, Ornette Coleman and a Highlands piper than you
get on this more muted set. The saxophonist’s partners here are guitarist
Mike Walker, bassist Reid Anderson and drummer Thomas Stronen, so a
free-grooving, north European feel is more in evidence.
But if this represents Bancroft’s softer side, his power to surprise is not
softened at all, and the set reveals a new line of development that in some
respects suggests a folksier but equally lyrical version of Andy Sheppard in
its delicate sax nuances and its willingness to let good ideas develop
slowly.
Bancroft and Walker sometimes converse in garrulous bursts of
free-association, before the drums and bass rise restlessly up around them,
then the short tumult gives way to a lullaby-like tune, a postboppish
sax/guitar theme that recalls Joe Lovano with John Scofield, long sighs of
tenor sound against scuttling free-rhythm, blurty improv and playful grooves
in which Stronen’s percussion inventiveness glitters.