Home, Small As The World 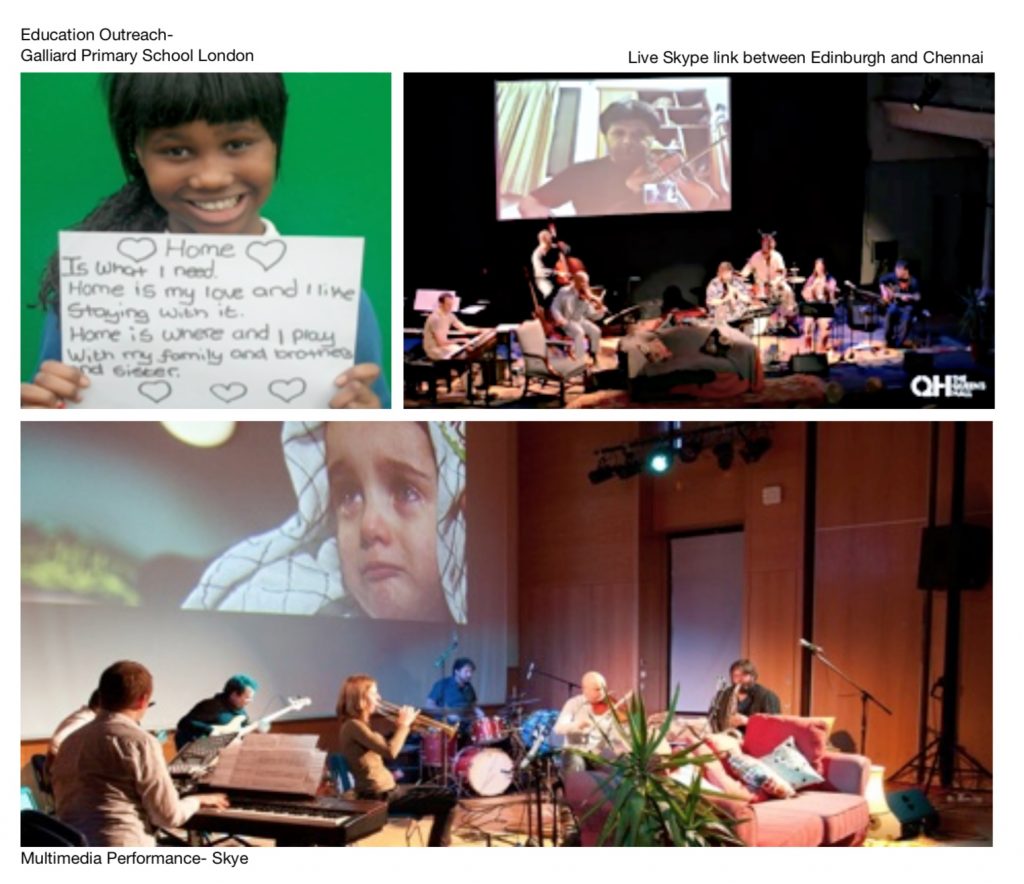 The project includes an Interactive Website + Social creativity- go here and look at what people uploaded to explain what home means to them- in words and images.

This material was used during the show as back projection video and animation- with contributions from audience as text and images.

The debut shows were at the Edinburgh Jazz Festival 2009- EJN Conference Best Of British Showcase 2009, and then Manchester Jazz Festival 2010- with the first Live Skype Solo (Mike Walker guitar).

Exploring the concept of ‘Home’ through jazz is a formidable task; and concepts such as ‘earth’ and ‘nationalism’ can also be difficult to convey through the medium of improvised music. But a bit of multimedia enabled this band to communicate such specific ideas successfully. The ensemble performed with zeal and displayed a spectacle of extended techniques and extempore virtuosity, as each shone individually. The effect as a whole, however, was where the focus remained; the world of kaleidoscopic, liquid beauty in which the audience found themselves immersed was tremendously stimulating.

In possibly a first for a jazz festival- although one can never be too sure about such matters- a three-piece suite and a band in pyjamas and dressing gowns graced the stage as saxophonist Phil Bancroft presented his multi-media enquiry into home and what it means to us.

Bancroft has approached his "Home, Small As The World" project with deep thought. From easy-loping, conventional quartet depiction of the daily swim with the dog and a graceful round adding fiddle, trumpet and guitar to denote home comforts, the music moved into less calm waters as Bancroft expanded his thesis into disturbed upbringings, the tyranny of domestic technology, politics and war.

As a musical work, there were oodles of strong themes and a variety of settings, from jazz-rock to free improvisation, designed to challenge and get the best from his musicians, who responded with a sense of involvement that belied the fact that they were separated from the audience by a couch.

John Fordham, The Guardian
The Scotsman ****

An insightful and stimulating performance - utterly bonkers but brilliant.

You are a SURREAL band! Every bit of that performance yesterday was stunning!